Skip to content
Richard Ellis-Roberts, 54, (1879-1953) a writer and translator (novels, hymns, biographies, plays) and briefly literary editor of the New Statesman, was appointed literary editor for Time and Tide in 1933 so he was the much trumpeted new boy at the dinner, attending with his Philadelphia-born wife Harriet. Despite his reputation, Lady Rhondda had her doubts and he was gone before 1935. In 1939 he and Harriet emigrated to California. An engaging but provocative person I would think. But that’s what critics get paid for.[1] [2] [3] [4]

With one couple on a table of four, if the couple do not sit together then the other two guests sit between the couple. Career-wise a chance to chat with Eleanor Farjeon would perhaps have been his choice of seating – perhaps with a word about writing hymns: in 1906 he had translated four hymns from Latin to English, whilst Eleanor’s Morning has Broken would be more famous in the long run (even if it may now more associated with Cat Stevens than Eleanor Farjeon).[5] Richard had a strong following on the radio and I suspect could be relied upon to keep the party going: John Fothergill the innkeeper on Table 12 recalled “Conway [a barrister Ed.] is one of those rare people who make an effort to keep things humming round him, like Ellis Roberts (whom I used to take for Mark Hambourg [a Russian-British concert pianist Ed.] and now Ellis Roberts tells me he has been taken for me, so who of the three of us three beauties is the most insulted?)”.[6]

Richard may be wondering whether it is going to work for him at Time and Tide, or he is working out how he is going to make it work? Who is in the room that he needs to meet? Are others in the room eager to meet the new Time and Tide Literary Editor, if they haven’t met already? He was not new to the milieu even if the new boy at the paper.

Richard was born on 26th February 1879 in Islington, (10 Willow Bridge Road, Canonbury) the son of Anne Catherine Corbett (1850 – 1936) and Richard Roberts, (1848 – 1913) a building contractor and JP, and the fourth of five children. At the time of their marriage in 1872 his future parents lived at 21 Alwynne Road and 24 Rheidol Terrace, Canonbury, respectively.[7] Both were children of “gentlemen”, Richard Roberts’ father being one Robert Ellis Roberts, from Aberystwyth – hence we can assume Richard’s name. His eldest brother William Cobbett Roberts was a clergyman, dying in 1953 not long before Richard, his second brother Robert Lewis Roberts received a C.B.E. His younger brother Arthur Noel, was in the building business in Stoke Newington, and he had a sister Margaret, one year his senior, of which we have little detail.

Richard was educated at Merchant Taylors School and St John’s Oxford (1901), and began his career on the Pall Mall Gazette in 1903[8].  His articles appeared in the Nineteenth Century, The Manchester Guardian and the Church Times. He was also a novelist, a writer of hymns, and of ghost or horror stories – and briefly literary editor of the New Statesman. A 1926 court case saw him accused of libel by an aggrieved drama critic as a result of one his reviews: the plaintiff won but was awarded just one farthing in damages.

Richard was also the author of several significant works including a translation of Ibsen’s Peer Gynt, (is that why Peer Gynt gets a nod in his wife Harriet’s life of her Irish born nanny?) and a biography of Samuel Rogers. Indeed, reading his 1910 book “Samuel Rogers and his circle” made me think that if he were alive today he might have enjoyed compiling this website, tracing lives, linking relationships. I did notice, as a resident of Highbury myself, adjacent to his birthplace of Canonbury, that he probably enjoyed writing the chapter “From Stoke Newington to London”, as he recalled how Rogers’s brother lived on Highbury Terrace “as quite a gay place, more like the seaside than anything else” and included many local engravings. [9] [10] He also wrote some detective stories.[11]

On 5th April 1920 Richard married American divorcee Harriet Ide Keen in Paris, 8th arrondissement (where Harriet was living with her parents after her divorce) and they then lived in Hammersmith. Harriet also pursued a writing career, with some writing for Time and Tide as we discuss on her pages.

In 1932 Richard left the New Statesman and most probably started writing for Time and Tide under the pseudonym Richard Sunne, when a new Time and Tide feature “Men and Books” was announced as a “literary causerie”.[12] Richard was appointed literary editor for Time and Tide in February 1933 (his appointment was featured in The Observer of 26th February and in Time and Tide on 4th March) so he was very much the new boy at the time of the dinner. “A critic in the belles-lettres tradition”[13] with a radio following, his arrival was announced with the flourish you would expect for a new appointment:

“We feel ourselves very fortunate to have been able to secure as literary editor Mr Ellis Roberts, whom I personally regard as one of the critics with the greatest insight, sanity, balance, and incisiveness that we have writing today. Whilst no man can be more cutting on occasion, his writings come from a mind which is extraordinarily mellow and full of sympathetic understanding of the world and humanity. His talks on the Wireless about new books have endeared him to countless thousands of listeners.”[14] [15] [16]

But in reality Lady Rhondda wasn’t sure if he would be suitable and just a week after his appointment she asked Winifred Holtby to keep an eye on him. “I shall have to try Ellis Roberts but – for all his feminism – I fear he may not find it easy to take detailed orders from a woman”.[17] His Times obituary noted that writing was his trade, whilst administration was irksome.[18]

WHAT RICHARD DID NEXT

On the Tuesday after the dinner, 28th March, Richard chaired a a meeting of the Executive Committee of PEN London at The Garden Club, which was already immediately having to tackle the concerns coming from Germany. PEN, set up more than a decade earlier, was the writers’ association promoting “freedom of expression, peace and friendship, not political debate” – the initials inspiration being Poets, Playwrights, Editors, Essayists, Novelists. The tensions in Germany were minuted: “Political situation in Germany: The Secretary reported that he had received letters and telegrams from the German Centre asking him to deny the alarmist reports which were appearing in the foreign press concerning the treatment of intellectuals in Germany.”

The Committee discussed this at some length and agreed “to write to Berlin expressing our gratification that the rumours in question were without foundation, and asking that a statement to this effect should be issued by the Berlin Centre, signed by such writers as Thomas Mann, Heinrich Mann, Stefan Zweig, Lion Feuchtwanger and Ernst Toller who were reported to be in exile.”

“It was also suggested that we should invite certain distinguished German writers to be guests of the London Centre during the next few months, and that invitation should be made known to the Berlin Centre.  The Secretary was asked to communicate privately with acquaintances in Switzerland with a view to obtaining further information on the subject of the alleged persecutions.”

H.G.Wells, Chairman elect of PEN London, following the recent death of John Galsworthy, was one of the eleven members attending that particular meeting.[19]

The next week, on 4th April, Richard chaired a PEN dinner for E.V. Knox of Punch. In addition to Richard, who at one point was a Vice President of PEN, here were at least another ten Rembrandt dinner attendees who were members at some time of PEN: E.M. Delafield, Eleanor Farjeon (and later on Committee), Cicely Hamilton (joined January 1933), Nora Heald (also on the Committee 1936 and later), Winifred Holtby, Lorna Lewis (joined March 1935), Sarah Gertrude Millin (Secretary of PEN in Johannesburg), Lady Rhondda, R.A. Scott James, and  Rebecca West (also Committee member and who had chaired a PEN dinner in February than honoured David Low, the cartoonist).

Richard also spoke at the Arts Theatre Club on a panel, with Rose Macaulay and Louis Golding on “Do Authors like the BBC?”, chaired by PEN member Amabel Williams.

Back at his day job, with several colleagues being very critical of his efforts, Richard didn’t last very long at Time and Tide, leaving in 1934[20] and replaced by Theodora Bosanquet in 1935 (after a short-lived tenure by a recently graduated Oxford man, John Beevers). Even to an outside observer like myself it is pretty clear that the job of literary editor for a magazine like Time and Tide was very sensitive (and of course very important to get right), with great debates churning as to the role of criticism, lowbrow versus highbrow etc. and of course a topic on which Time and Tide ran its own series of articles. 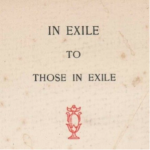 Richard’s mother died in 1936 (his father having died in 1913) and in 1939 he and Harriet emigrated to her homeland of America, sailing on 15th October from the Bordeaux port of Le Verdon, France, little more than a month after the start of WW2, albeit still during the “phoney war” phase. Richard and Harriet were then 60 and 54 respectively.

Somehow his Christmas card (below) from their time in California seems to hint as a sense of rejection and of a man full of deep thoughts but possibly someone likely to expressing them at the wrong moment or in the wrong context. Not quite my idea of a Christmas card even if in wartime when “safe” away from the bombers…… 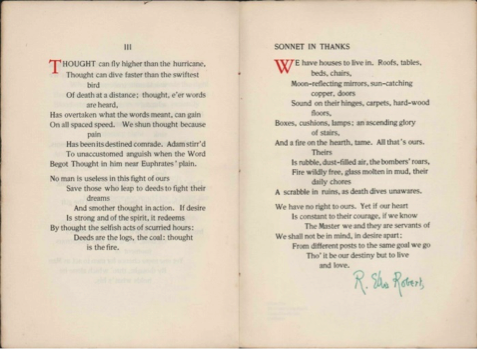 The Ellis-Roberts Christmas card when in exile

Richard pre-deceased Harriet and died on 5th October 1953 at Cypress House, Valley View Road, Carmel-by-the-Sea, Monterey, California.[21] They had no children but there would seem to be descendants of his siblings living today.

[7] Of interest mainly to local Islington residents like me.

[8] At the time my paternal grandfather, Charles O’Brien, was a compositor on the Pall Mall Gazette. It was in 1903 that the Gazette staff outing was held at Cliveden, the grand country home on the Thames of William Waldorf Astor, the proprietor of the paper.