Skip to content
Lorna Concanen Lewis, 32, (1900-1962) was a writer, journalist, secretary, chauffeur, possibly general factotum and friend to all at Time and Tide, in particular to E.M. Delafield and to Margaret West. She lost her only brother and her father in the War. She was referenced as “Miss L” in Virginia Woolf’s diary and featured briefly thinly disguised in E.M.D.’s Diary of a Provincial Lady.  A reviewer of children’s books for Time and Tide, she got into her stride in 1943 as a writer of books for children, continuing for almost two decades.

For a table of four from Time and Tide is probably doesn’t matter. She is sharing a Bloomsbury house with Margaret West at this time, and eight others.  She quite probably had a quite a hand in getting this whole event together.

Relatively new to Time and Tide so this is a good time to take it all in.

Lorna Concanen Lewis was born on 24th June 1900 in Surbiton, Surrey, to Hester Beryl Press, (1868 – 1955) a solicitor’s daughter, and Francis Ball Lewis, (1863 – 1917), solicitor. After studying at University College London, Lorna then worked in girls’ clubs and as a juvenile welfare officer, on the editorial staff of The Times, and then started writing books and freelance journalism.

Lorna did varied war-work – driving a refugee van in France in 1940, tea van in London in the Blitz, a machine operative in a factory, and a civilian officer Gunnery Division, Admiralty. Her only brother Flt. Sub-Lt. Frank Concanen Lewis was killed in action in Northern France in August 1917 at the age of 19, their father, Corporal Lewis of the 88th Battalion, Northampton Regiment, having died in the Holborn Military Hospital, Mitcham in March of that year – leaving their mother a widow for nearly forty years.

Lorna’s mother’s sister, Nina Press, was married to a Gerald Lysaght, a first cousin of William Royse Lysaght, at the dinner, part of Lady Rhondda’s business network – perhaps Lorna had a chat with him on the evening.

Lorna knew E. M. Delafield well – there are many references to her in the book about EMD, “Life of a Provincial Lady” by Violet Powell (Heinemann 1988), which also says that she is the “Miss L” referred to in Virginia Woolf’s Diary. Lorna joined Time and Tide in the 1930s so was quite possibly already on the staff. She is quoted as saying that Lady Rhondda “extracted the last ounce from her staff [and] tore strips off us and freely and frequently”.[2]

“June 9th. –Am rung up on the telephone by Editor of Time and Tide and told that We are Giving a Party on June 16th, at newest Park Lane Hotel. (Query: Is this the Editorial We, or does she conceivably mean she and I?–because if so, must at once disabuse her, owing to present financial state of affairs.) Will I serve on the Committee? Yes, I will. Who else is on it? Oh, says the Editor, Ellen Wilkinson is on it, only she won’t be able to attend any of the meetings. I make civil pretence of thinking this a businesslike and helpful arrangement, and ask Who Else? Our Miss Lewis, says the Editor, and rings off before I can make further enquiries. Get into immediate touch with Our Miss Lewis, who turns out to be young, and full of activity. I make several suggestions, mostly to the effect that she should do a great deal of hard work, she accedes delightfully, and I am left with nothing to do except persuade highly distinguished Professor to take the Chair at Debate which is to be a feature of the party.”[4]

A cameo which suggests Lorna was likely to have played quite a role in putting together our dinner. Curiously June 16th was the date of the above photograph – but Time and Tide and Lady Rhondda held frequent parties and June was party time.

In 1933 Lorna was living at 21 Taviton Street, St Pancras, with 10 others including Margaret Isabella West. Taviton Street runs between Tavistock Square and the Friends House off Marylebone Road, by Euston Station.

WHAT LORNA DID NEXT

Referred to as chauffeur, secretary and friend to EMD, in 1936-37 they were both living at 57 Doughty Street, Bloomsbury, with others. She obviously could turn her pen to many subjects and In 1937, when the above photograph was taken at Lady Rhondda’s Literary ‘Rout’ party, The Tatler’s gossipy notes read:”Lorna Lewis writes so charmingly about animals and practically lives at the Zoo“.

At the time of the September 1939 census. Lorna Lewis, journalist, was residing at “The Harrow”, a pub just north of High Wycombe, her role as a Transport Driver in the Westminster ARP Service also noted, and in the same dwelling, along with the Thomas family (father the pub licensee, grandfather Thomas a barman), was a very close contemporary (born 1st July 1900), Cicely McCall, an organiser of the National Federation of Women’s Institute. Perhaps just staying the night.

On 9th March 1940 (also according to The Times) Lorna represented E.M. Delafield at a memorial service for fellow dinner guest Marion Jean Lyon, Time and Tide Board member who ran Punch’s advertising department in the 1920s.[5] Lorna was given the probate for Margaret West – there was a close friendship / connection there too.

“The addition of Hitler and German measles to other non-central European pests is likely to make the Easter holidays rather more complicated than usual this year. A newly published batch of books for boys and girls is therefore doubly welcome.

In in her Autumn Time and Tide review, on 26th October 1940, Lorna wrote, as things got serious:

“To turn from Bombs to Books is the right kind of evolution. On this occasion it is also a statement of fact, for these juveniles were lately rescued from a partially bombed out flat. Indeed, even as I refer to these pages, small clouds of sticky concrete dust and other souvenirs of my late home fly from them. The rescuer’s task has been a happy one, for the general standard of this batch is high. There is much to recommend to the younger habitues of shelters and to those more fortunate above-ground dwellers.

Thanks to a blog online we know that Lorna got into her stride as a writer in WW2, writing for the rest of her life.

“Lorna was the author of more than two dozen children’s books, including some early titles for young children. Tea and Hot Bombs (1943) follows a teenage girl as she begins work with the Mobile Canteen Corps during the Blitz in London. Feud in the Factory (1944) is also set during World War II. She also wrote biographies for young readers, girls’ career stories—including June Grey: Fashion Student (1953), Valerie: Fashion Model (1955), and Judy Bowman: Therapist (1956)—and what looks like a school story, Spring School (1958), not mentioned in Sims and Clare. Other titles include Mystery at Lock House (1947), Marriotts Go North (1949), Mystery at Winton’s Park (1952), Hotel Doorway (1953), Shirley Goes Travelling (1959), and Shirley Goes to America (1961).[7] 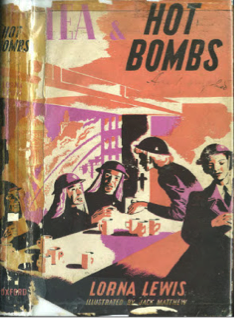 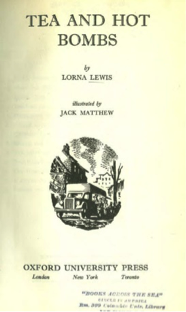 The blogger reviewed Tea and Hot Bombs thus: “This book has been on my Hopeless Wish List for years now. It’s now vanishingly rare, and when copies do surface, they don’t come cheap. I wasn’t even absolutely sure if it was an adult novel or a children’s tale, but I knew that it was set during the Blitz. I have finally had a chance to read the book. The opportunity turned out to be quite worthwhile. The book is a little bit uneven, a curious mix of adventure tale and wartime career story for girls, but its presentation of wartime events in and around London, through the eyes of a young girl experiencing them for the first time, is surprisingly effective and has a vivid ring of truth despite some obvious idealization”.[8] Lorna herself wrote:

On 23rd September 1959 Lorna was on a BOAC plane to Boston, Mass, visiting one Richard Wait, her permanent address 88 Park Mansions SW1, in Knightsbridge near the junction at the top of Sloane Street. As a matter of curiosity a 1939 postcard from her offering some papers of Alfred Concanen was recently trading on Ebay. Perhaps the 19th century lithographer famous for his sheet music covers for Music Hall songs. Perhaps related? 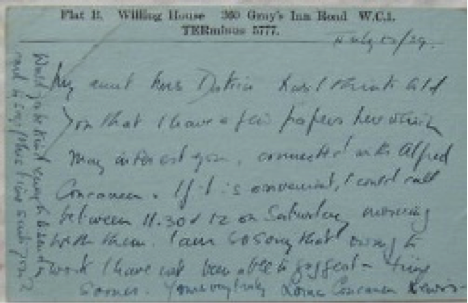