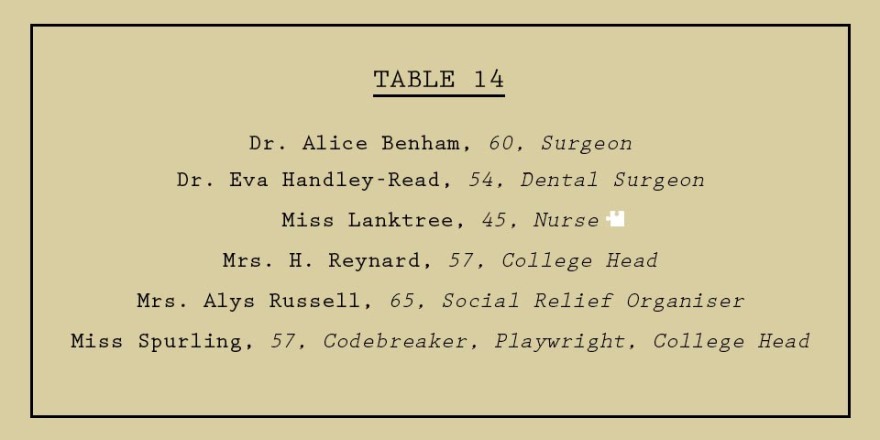 A powerful table of contrasting intellects and talents, you could probably fill volumes with the names of students and patients and women generally who had benefited from the support and encouragement and care from the six women at this table.

Claribel Spurling, 60, was a top ranking code breaker in the WW1 intelligence services, with a career as a teacher, writer of plays and children’s books, and by this time Warden of Crosby Hall, the residence for University Women, connecting her with many of the women of the day and of the future (and also financially supported by Lady Rhondda). Claribel may well have been the convenor of this group. Dr Elizabeth Sloan-Chesser (Table 10) also went on to run Crosby Hall.  Hélène Reynard, 57, whose talents were noted quite early on by John Maynard Keynes, was by now running the King’s College of Household and Social Science (later Queen Elizabeth College), where Tess Dillon taught physics. They would undoubtedly been well acquainted given their responsibility for the university women of the day in London. Dr Eva Handley-Read, 54, married to her artist husband at the time of the dinner, not only distinguished herself as a pioneer woman dental-surgeon, but was also a militant suffragette (did her male patients know that as she wielded her instruments?) and worked with Elizabeth Garrett-Anderson at the Endell Street Military Hospital during WW1. Fellow medic Dr Alice Benham, 54, also was decorated for the wartime service in Belgium and Russia and practised from her Chelsea residence. The third medic, the wonderfully named Irish policemen’s daughter Kathleen Borgia Mary Lanktree, 45, is less well known to us, we believe served as a nurse and later, in 1938 married a retired colonial policeman. The table is completed by its most senior member the American Mrs Alys Russell, 65, who for all her caring and support for children and refugees will probably always be best known as the first husband of Bertrand Russell. All six spent their lives looking after the welfare, medical and educational, of many people, in peace and in war. They will have not have been short of conversation.

THIS WAY TO TABLE 14

© Richard Rhys O’Brien 2019 Copyrights for other material are also indicated on this site, in particular for visual images.