Skip to content
Hélène Reynard, 57, (1875-1947), suffragist, economist and noted college administrator, gained attention when her work was praised by John Maynard Keynes.[1] [2] Born in Vienna, coming to the UK with her family before the first world war, she graduated from Somerville, Oxford, and Trinity, Dublin.  She gained management skills at Somerville and at Girton, Cambridge and at her father’s Bradford woollen mill before becoming Warden of the King’s College of Household and Social Science (now Queen Elizabeth College). She played an important role in women’s organisations, both within education and the workplace. 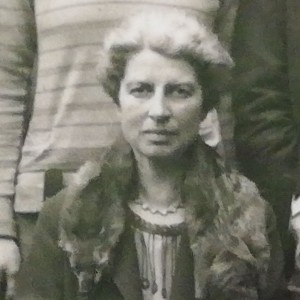 Whilst she obviously will have been able to talk shop with fellow College Warden Claribel Spurling, this is a table where they would have all mixed well, and where I have no bright ideas. Do you? I have to assume the poor creature adorning her neck was some play of her adopted surname: a Foxy Lady?  Wouldn’t see that today, Hélène.

I could well imagine this table full of ideas of how to promote the cause of women, in education, in health, in the professional world and probably ready to slay the next dragon after celebrating the progress made so far. This table was full of management experience.

Hélène Reynard (born Reinherz), was born in Vienna on 24th August 1875 to Mina Schapira (1849 – 1927) and Marcus Reinherz (1840 – 1920). The family emigrated to Bradford, where her father owned a woollen mill. Hélène was educated at Bradford Girls’ Grammar School and Girton College, Cambridge (1893 -97), achieving 2 honours in the moral sciences tripos, and in 1905 receiving her MA from Trinity College, Dublin. After Cambridge she lived in London, acquiring secretarial and bookkeeping skills and working for several women’s clubs. In 1904 she was chosen (out of forty applicants) for the position of junior bursar at Girton College, helping to run the residential side of the college and giving occasional instruction in economics. She resigned in 1913, at her family’s urging, to help manage her father’s factory.

At the outbreak of war in 1914 the family changed their name to Reynard. As joint director of the Bradford Wool Extracting Company Ltd until 1922, Hélène gained considerable management and business skills and experience. She was an active supporter of women’s suffrage and, after 1918, the Society for Equal Citizenship. During the war she was secretary of the Bradford Women Citizens’ Association and of the Women’s Industrial Interests Society, an organisation which aimed to protect the interests of women workers employed during the war in occupations previously reserved for men.

Hélène’s father died on 4th March 1920 (her mother died in London in 1927)and in 1922 she moved back to college administration, becoming the first full-time and salaried Treasurer and secretary of Somerville College, Oxford, as well as one of the first fellows of the college –where she oversaw the reorganisation of the college’s structure. In 1922 her work was particular noted by John Maynard Keynes who recommended her for a post of lecturer at King’s College for Women. A university lecturer on economics and business administration, an Oxford MA was conferred on her in 1925.

In 1925 Hélène was appointed Warden of the Household and Social Science Department of King’s College for Women, then in the process of achieving independence as the King’s College of Household and Social Science (later Queen Elizabeth College). She held this position until her retirement in 1945. The College lay at the heart of the effort to foster scientific study of all aspects of domestic life. Hélène thus helped shape not only this institution but also development of the ‘household science’ movement – with her main goal to develop new careers for women. While not fully realising the ambition of developing ‘an applied science of the household’, the college did develop a monopoly over the new science of nutrition, and provided a useful science training to a large number of women students.

WHAT HELENE DID NEXT

Throughout the 1930s Hélène played an important role within university and professional women’s organisations, including the Women’s Employment Federation and the Federation of University Women. She was President of the London Association of University Women; Fellow of the Royal Economics Society; and a member of the University Women’s Club. In 1938 she helped to found the Institutional Management Association. From 1929 to 1939 she was an examiner for the civil service commission. A regular contributor to the Economic Journal, her books explained the basic principles of bookkeeping and of institutional management, including Institutional Management and Accounts (1934), What is a Balance Sheet? (1935), Domestic Science as a Career (1947), and, with D. Hustler, Book-Keeping by Easy Stages (1937)[1] [2] [3]

[3] King’s College London, College Staff, Archives, Ref Q/PH1/6-69, accessed 4th July 2019, who kindly have allowed me to reproduce these photographs of Hélène at the College.