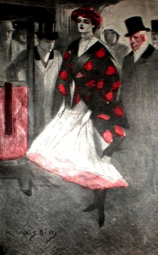 Laura Campbell Wallis Mills, 31, (1902-1987) was an actress and the daughter of the famous cartoonist Arthur Wallis Mills.  We find good reviews for her just after her student days but after 1924 she seems to have retired to Suffolk, perhaps to look after her mother, for all the information we have. Laura celebrated her 31st birthday a week before the dinner.

We need an image – for now,  in lieu of her picture, here is the cartoon “Leaving the Theatre” by her father Arthur, perhaps inspired by Laura. All contributions are welcome!

Perhaps she was beside the other younger lady on the table, Marguerite (Mrs L. Raven-Hill) and also beside Eleanor Glidewell, given that the latter did write a play herself. But we don’t have a lot to go on.

What’s On Her Mind?

Apart from knowing she lived off Regent’s Park in 1933, we have a bit of a black hole between her last stage report in 1924 and being a Suffolk freeholder in 1936. We would indeed like to know what was on her mind. If, as is possible, she had left the stage to care for her mother, then perhaps this trip to London was a chance to catch up with people, invited perhaps by cartoonist Leonard Raven-Hill and his wife (on this table), Marion Lyon. A bit of a mystery.

Laura was born on 16th March 1902 in Ealing to Ethel Maud Greig, (born in India on 6th November 1874) and artist Arthur Wallis Mills (son of a gamekeeper). The family home was in Walberswick, Suffolk – near Orford where Laura died in 1987.[1] Perhaps her father’s work was part of the link with Lady Rhondda: his 1910 Punch cartoon “The Suffragette that New Jiu-Jitsu. The Arrest” is a classic and celebrates Mrs Pankhurst’s fearsome Bodyguard led by “Kitty” Marshall. Perhaps his “Leaving the Theatre” for The Black and White Illustrated Budget was inspired by his daughter?[2]

There are press reports of Laura’s acting career between 1921 and 1924 but otherwise she either sank without a trace or pursued something else.[3]

According to the Illustrated London News of 9th April 1921, in ‘Young Ladies get their Medals’ “Laura Wallis Mills was well worth her piece of silver for her touching, beautiful rendering of the girl who in Malleson’s playlet studied for the stage of necessity and saw the others soaring with the medals while her breast remained sad and unadorned”.  She had played that part in RADA’s student performances in March 1921, winning the Silver Medal, the Bronze Medal on that going to one Miss Flora Robson (the Gold to Miss Joan Swinstead).[4]

Laura played Diana Rossiter in Horace Annesley Vachell’s Count “X” at the Garrick in April 1921, the Illustrated London News lauding her as “an attractive newcomer … of the kind that is wanted”.[5] [6]

The Stage of 18th January 1923 reported that she had left a role of The Good Fairy to take up Shakespearean work.[7] In April 1923 she played Miss Huddle in Arthur W. Pinero’s The Gay Lord Quex, at His Majesty’s.

From thereon, apart from a performance in February 1924 in Folkestone Pleasure Gardens, the trail runs cold in terms of the stage.[8] In 1930 she was living with her parents at Holly Bush House, Hammersmith. In 1933 and 1934 she was living at 75 Albert Road, NW8, probably Prince Albert Road alongside the Park, now rebuilt. It would seem that was a women’s hostel, several actresses being there at the time, a future lawyer and others – in total 12 single women resident plus one man and his wife.

What Laura Did Next

What indeed. In 1936 the Gazette reports her as a freeholder of land in Suffolk, whilst giving a London address of 14 Dorset Square London NW1. In 1939 she was living with her parents at their home in Debden, Suffolk. Her mother was incapacitated at the time and died that year. Her father was retired by 1939 and died in 1940. So she may have been a family carer for a while. Laura died in Suffolk on 1st November 1987 at the age of 85, unmarried, forty seven years later.