Skip to content
Edmée Elizabeth Monica de la Pasture (hence Delafield), 42, (1890-1943) was a writer, most notably perhaps of Diary of a Provincial Lady which includes a “sketch” of Lady Rhondda. She published over thirty novels and several other books of sketches, essays, short stories, and parodies, between 1917 and her death in 1943. In 1926 Winifred Holtby wrote in “Letters to a Friend”[2]: “E.M. Delafield is very thin, thirtyish, smart, dark, and married, with small children who occupy her a great deal. She is also shy and modest, and confided in me engagingly that she had never seen, much less eaten, oysters before”. Others described her as ‘a witty, extremely soignée person, with a gift for laughter‘.[3] One of the eight speakers at the dinner, Edmée or EMD, was well connected around the room – perhaps at the height of her career.[4]

From the recent online Time and Tide Centenary Project’s Festival of Women Writers and Journalists, hosted by Nottingham Trent University, you can now watch the video by Professor Barbara Green, University of Notre Dame, on “Everyday Feminism: E. M. Delafield’s ‘Diary of a Provincial Lady’ in Time and Tide.”

For an occasion like this the ideal mix might be to be seated with one long time acquaintance (e.g. another writer or a Time and Tide colleague) and one person less familiar. Of the latter she would have enjoyed a conversation with Lady Rhondda’s aunt, Rose Haig-Thomas, or with the artist of the evening, Alice Burton. Of the former perhaps she would have enjoyed the evening with her illustrator, Arthur Watts, who was probably very good company.

An observer of people she may well have enjoyed meeting and immersing herself in the atmosphere of the evening, thinking of new ideas, even looking for more subjects to parody. Perhaps her recent parodies attacking male anti-feminism, (see below) would have come up in conversation. She may also be interested in hearing reactions to her new play The Glass Wall which had opened a month earlier. I’m not sure if her 1933 book, A Gay Life, set on the Riviera, was out yet.

Edmée Elizabeth Monica de la Pasture was born on 9th June 1890 at 6 Walsingham Terrace, Aldrinton, near Hove, Sussex, the elder of the two daughters of Elizabeth Lydia Rosabel, née Bonham (1866–1945) and Comte Henry Philip Ducarel de la Pasture (1840/41–1908). Her colourful pedigree includes her father’s descent from the maharaja of Purnea (Bihar, India) and her great grandfather fleeing from revolutionary France to England in 1791. Edmee’s mother, a diplomat’ daughter, wrote lucrative fiction under the name Mrs Henry de la Pasture. The pseudonym, Delafield, a play on de la Pasture, has been attributed to Edmée’s younger sister Bettine Marie Yolande (1892 – 1976), known as Yoé, a doctor, who trained in Bristol and London. Ignored in her famous sister’s main biographies, Yoé was said to have had a rather sporadic medical career and an apparently unsuccessful marriage to a Viennese Dr Friedl.[5] The play on the name reappears in The Diary of a Provincial Lady.

Edmée was brought up in London, Devon, and Monmouthshire, educated by French governesses and at several schools, as a result bilingual but ‘allowed to read for only an hour a day’.[7] She was sent off to a Belgian convent (for nine months) before she eventually married Major (Arthur) Paul Dashwood (1882–1964), the second son of Sir George Dashwood, at St James’s, Spanish Place, London on 17th July 1919. In 1920 their son Lionel was born, where Paul was a civil engineer. They returned to Britain in 1922 (the expatriate life it seems not being for them), settling down in Croyle House near Kentisbeare in Devon. Here Edmée lived for the rest of her life. Their daughter Rosamund was born in 1924, husband Paul became a land agent, though Edmée earnings were an essential addition. That year she became President of her local Women’s Institute, a post she filled until she died.

Edmée started to write for Time and Tide in 1922 and she joined the Board in 1927.[9] From late 1929 she began, in the pages of Time and Tide, The Diary of a Provincial Lady (1930) – illustrated by fellow table member Arthur Watts. The year before the dinner she published what has been considered probably her best book, Thank Heaven Fasting, ‘an almost unbearably poignant account of the struggles of a young girl of respectable family in Edwardian times to find a husband—any husband—as a passport to some kind of grownup life’ (Colegate). In April 1932 she and fellow table guest Rebecca West were two of eight women writers giving their views on Man, in publisher Hamish Hamilton’s new book, “Man, Proud Man”.[10] On 18th February 1933 one of her parodies (attacking male anti-feminism) was published entitled a “Totally Imaginary Conversation between Ourselves and Mr. Sinclair Lewis”, the famous American novelist.[11] A month before the dinner, her new somewhat autobiographical play, The Glass Wall, about religious vocation, with lots of parts for women, opened at the Embassy Theatre.[12]

WHAT EDMEE DID NEXT

In 1933 Edmée published “General Impressions”, Macmillan, bringing together many of her sketches from Time and Tide.  The collection was “affectionately dedicated to Jean Raven-Hill”, otherwise known as Marion Jean Lyon, the Punch advertising manager on Table 5.  It was in the same year that Edmée starting contributing to Punch (thank you to Dinner Puzzle contributor Helen Walasek for that great piece of networking information). 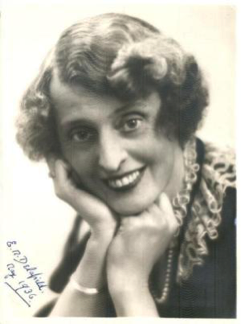 A year after the dinner Edmée co-signed, along with dinner guests Sylvia Lynd and Rebecca West (and others) a letter to The Times in support of a new nursery scheme in support of new housing schemes.[13] In her later book “Straw Without Bricks” (1937) she described a visit to Soviet Russia and as a sign of the times, no pun intended, we can read in the Court Circular column of that eponymous newspaper of record in 1936 that “Miss E.M. Delafield (Mrs Paul Dashwood) has left for Russia and expects to be away for several weeks. No correspondence will be forwarded.”[14]

Lady Rhondda ‘used to wonder how that frail looking creature could stand the strain of the unending round of never ceasing work. I suppose it would be true to say that in the end she did not‘ (Time and Tide). 42 at the time of the dinner, Edmée died of cancer aged 53 on 2nd December 1943 at home in Devon. Her son Lionel Dashwood predeceased her in 1940, possibly by his own hand. Her daughter Rosamund Dashwood emigrated to Canada (where she died in 2007). In 1961 Rosamund published Provincial Daughter, a semi-autobiographical account of domestic life in the 1950s a light-hearted continuation of her mother’s “Diary”.[16]