Mrs Rose Helen Haig-Thomas, née Haig, 79, (1853-1942), natural science researcher, poet and children’s author, was the maternal aunt of Margaret, Lady Rhondda and was the only family member at the dinner. Her sister, Sybil, the Dowager Viscountess Rhondda, Margaret’s mother, was travelling, possibly being in Madeira at the time of the dinner. Her husband was the brother of Margaret’s father, two Thomas brothers marrying two Haig sisters.[1] Professionally Rose was a keen researcher into animal genetics and sponsor of The Mendel Journal. Her poetry was published in the notable Yellow Book and she wrote at least two children’s books. And from time to time she would write to Time and Tide. Her family have kindly provided us with a photograph of Rose in her younger days. A favourite find of mine, as I wasn’t expecting the natural scientist to emerge in my research.

Perhaps she and Elizabeth Haldane would have enjoyed each other’s company, and perhaps Elizabeth Lucas would also have been a good dinner companion. But with her scientific interest, her writing and her poetry, she could have sat anywhere and probably told people things they didn’t know. As one of the senior ladies at the table perhaps she was seated with Lord Camrose.

Though Rose was, I assume, primarily at the dinner as the aunt of Margaret, albeit not one of the Haig aunts that, like Margaret’s mother Sybil, inspired Margaret’s suffragism, her presence did mean that the interest in the plant world of our planet was represented. She was into genetics, sponsoring The Mendel Journal, and writing herself on subject such as “Parthenogenesis in Nicotania” and on the transmission of secondary sexual characters in pheasants. She might have told you the one about the frog and the snake. For a dinner conversation some advice about your rock garden might have been a little easier to take. Or Rose may have reflected on poetry or discussed her children’s books.

In July 1895 Rose’s poem Mars, A Medley, was published in The Yellow Book, the Beardsley covered Illustrated Quarterly, published by John Lane, a publication which ruffled a few feathers at the time perhaps more by association with decadence (Oscar Wilde never wrote in it but was a good friend of Aubrey Beardsley, the cover artist) and in its deliberate colour, echoing French illicit fiction of the time, as in its content.[2] 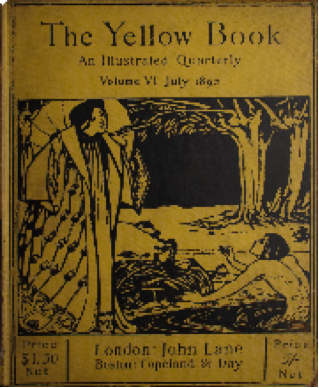 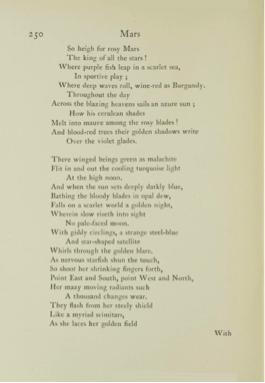 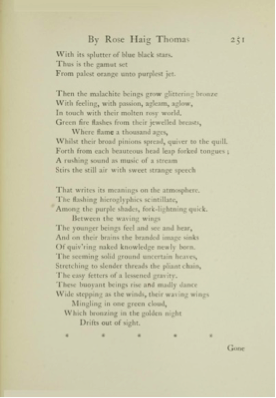 On 18th August 1898 a letter from Rose was published in Nature[3] and could well have made for good conversation at the right time, but perhaps not at the dinner table:

“YOUR correspondent, Colonel Major, may be interested to hear of another instance of a Batrachian returning alive from the stomach of a snake. A grass snake of about 24 inches, kept in captivity, had not fed for three weeks: it was then given a very large specimen of the common frog, full-grown; this was swallowed at once, in the usual way by taking the hind leg first. In about an hour and a half the frog was a third of the way down the snake’s body. Then, on the snake being played with and handled, after some minutes the lump began to move up rapidly towards the head of the snake, the mouth opened and out slid the frog; rather off colour, and not very happy-looking, but quite able to hop about in a shuffling fashion, though decidedly shaky on his legs. To an amphibian imprisonment without air could not be very hurtful for a few hours, were it not for the poison of the gastric juices. When the grass snake was left again with the frog it re-swallowed its prey. A snake will often take half an hour swallowing a frog: the distension of the jaws during the operation is extraordinary to witness. In about an hour’s time the frog will be a third of the way down the snake’s body.”

Unlike Margaret’s former husband, her interest in game birds took on a different take.

In that year the Chiswick Press published her children’s book Spiderland, “a book about frogs, spiders, moths, earwigs, greenfly, weevils, wasps, ants and flowers. A book for children who have learnt to read, illustrated”. 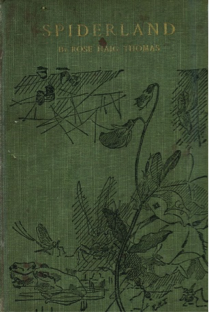 On 19th February 1903 Rose and one Mrs Norman were the first ladies to attend a meeting of the Royal Zoological Society.[4] Curiously at the same meeting three women, Mrs Ellen McGoff, Mrs Agnes Innes and Mrs Stella Ettlinger were elected Fellows at the meeting. Did that imply the three Fellows were not present at the meeting, but could be elected Fellows? Or is there some significance in the use of the word ladies? Perhaps you can help?

A month later Rose was stirring things up a bit:

Monthly meeting of the Zoological Society

The first sign of discontent with the present state of affairs appeared when Mrs. Rose Haig Thomas handed in a motion, which will probably be discussed at length at the anniversary meeting (April 29). This lady seeks information on three distinct points – (1) why Mr. Clarence Bartlett was asked to resign on a pension of £200 a year (2) why the clerk of the works should be asked to resign without a pension; and (3) why the retiring secretary should be granted a pension of £700, being £100 a year more than the society proposes to pay to the holder of the office.

When it came to the Anniversary meeting it seemed that this wasn’t within the powers of the council to deal with, so the issue was postponed to the next meeting. Meanwhile Rose clearly thought some servants of the society may be making a few bob on the side with respect to the animals’ food supplies. Murky waters at the Zoo?

It had been anticipated that there would be considerable discussion on the motions of Mr. Waddilove and Mrs. Rose Haig Thomas, which dealt respectively with the right of the council to grant pensions and with the action of that body in particular cases – those of the late secretary and superintendent – and the refusal of a pension to the clerk of the works. These matters, however, cannot be said to have come before the meeting, for counsel’s opinions made it clear that there was some doubt as to the power of the council to pension the secretary, inasmuch as he was not appointed by them, but by the Fellows at the annual meeting…… The president promised that at the June meeting full information should be afforded with respect to all the points raised. Mrs. Rose Haig Thomas will ask whether any animals had been sold and the money not accounted for and whether food had been purchased for the animals from servants of the society in contravention the byelaws. The meeting then adjourned.

In October 1909 Rose was writing in The Mendel Journal, a venture she was paying for, about Parthenogenesis in Nicotania. (That’s a great title for a mystery play or something!) This was widely quoted though one note did suggest her results might have been misinterpreted (though I’m not sure he meant by her or by someone else drawing out implications). This is even less my field than feminism. That year Grant Richards published her children’s book The Doll’s Diary, illustrated by John Hassall, well-known for his advertisements and poster designs.[7]

In 1913 Rose was elected a Fellow of the Linnean Society. In the same year it was reported that her son Peter brought some seeds home for her from 7000-8000 feet up in the Arussi mountains of Ethiopia.[8]

In 1921 Douglas Haig, war duties behind him, was taking her advice in developing a garden.[9] Rose was clearly a dab hand in stone gardens which a 1905 Guardian reviewer of her book “Stone Gardens” Simpkin Marshall & Co, 7/6 noted was “a style of a garden not common in England” though the damp climate is very suitable.[10]

WHAT ROSE DID NEXT

In 1934 Rose picked up her forensic pen to write to Time and Tide:

Dear Sir, “The Press Censorship Map of Europe you reproduce from the American Press lacks a black patch, Britain, whose international press ownership makes a censorship as absolute as that imposed by any European government; news omitted is a subtle form of propaganda. Yours etc Mrs Rose Haig Thomas, 71, Strand on the Green[11]

Note that the Dear Sir appellation when the Editor was a woman, and the paper strongly feminist, was a subject debated at length at Time and Tide, settling on the Dear Sir.

Rose had homes at The Rookery, Breamore, Hampshire and 71 Strand on the Green, Chiswick. Rose died on 31st August 1942 at the Rookery, at the age of 89.

[4] Mrs Rose Haig Thomas one of the first ladies to attend a meeting of the Zoological Society.