Skip to content
William Ewert Berry, 1st Viscount Camrose, 53, (1879-1954), newspaper proprietor, was one of the eight speakers at the dinner, the second of the three Welsh born Berry brothers and the older brother of Sir Gomer Berry. He turned around the Sunday Times, bought the Financial Times and was in the process of reviving the Daily Telegraph at the time of the dinner. Very much part of the industrial/media empire linked to Lady Rhondda. His wife Lady Camrose was an organising secretary of the Six Point Group. Like his brother Gomer he was a supporter of Neville Chamberlain at this time but after Munich he switched to support Churchill, abandoning the side of appeasement.

Definitely beside the chair of the dinner Winifred Cullis (who was in turn beside Lady Rhondda).

Who should be on his left? Would protocol suggest perhaps Mrs Rose Haig-Thomas as one of the more senior ladies and aunt to Lady Rhondda? – I suspect she would have been good company and someone with whom he may not have spoken with a great deal.  Who do you suggest?  A firebrand such as Rebecca West? The original photograph is not in the newspaper’s archives, alas. 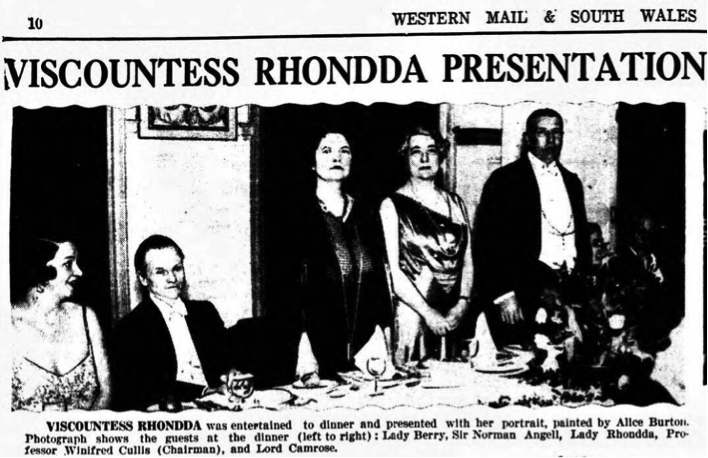 Still a supporter of Neville Chamberlain (at this time Chancellor of the Exchequer in the National Government led by Labour’s Ramsay MacDonald) he would probably have been concerned at the evolving events in Berlin, but it would be a few years before he switched to support Churchill. Quite probably he was the lead sponsor of the evening and was probably looking forward to making a good speech. The reports tell us that he said of Lady Rhondda that “One of her greatest qualities is loyalty to causes and to people. She deserved well of her generation”. The Guardian continued: “He added that her paper had its own corner in the world and was doing good work. – a handsome tribute, since he had admitted that when Lady Rhondda first spoke to him of her desire to publish Time & Tide he had advised her against it”.[1]

William Ewert Berry was born on 23rd June 1879 at Gwaelod-y-garth, Merthyr Tydfil, the second of the three sons of Mary Ann Berry née Rowe (1847-1922), the daughter of Thomas Rowe, of Pembroke Dock, and John Mathias Berry (1847-1917), an estate agent and a Liberal alderman.

After leaving school at fourteen, William began his publishing career at the Merthyr Times and other local papers before a short-lived career as a City reporter in London on the Investor’s Chronicle. After 3 months out of work he joined the Commercial Press Association and in 1901 launched his first venture, Advertising World, with funds borrowed from his older brother Seymour Berry. He then brought his younger brother James Gomer Berry to London to support him. He sold Advertising World after four years and started Boxing in 1909 – one of his sporting passions.

Throughout his career he worked with Gomer though always in effect the “senior partner”. In 1915 he bought the struggling Sunday Times (getting a tenth of the circulation of the rival Observer) and by the time he passed on the Editor-in-Chief’s chair to Gomer in 1937 it was comfortably outselling its rival. Gaining the Financial Times in 1919 the brothers were gaining power and in 1921 he became a baronet. In 1925 he hired James Drawbell in 1925 to run the Sunday Chronicle. The brothers took over the Daily Telegraph in 1927, William successfully turning it around. His own business portfolio also increased on the early death of his elder brother in a riding accident in 1927. In 1929 he rose to the House of Lords, as Baron Camrose. At the time of the dinner, William was in the process of reviving the fortunes of The Daily Telegraph.

In 1905 he married Mary Agnes Corns (1883 – 1962), the eldest daughter of Thomas Corns, and they had four sons and four daughters. Lady Camrose was an organising secretary of the Six Point Group – this role would suggests she would have been a strong candidate to be at the dinner, but at this time would not have been styled Lady Berry, who would have been his brother Gomer’s wife (on this table).[5]

His main hobbies were riding, sailing and motoring, though he had to abandon the first after an accident in 1926. He became a governor of Christ College Brecon in 1929.[6] His ODNB biographer writes “for a man who appeared to take himself so seriously, Camrose appears to have been good company: witness his popularity as an after-dinner speaker and his appreciation of a good joke.”.[7]

WHAT WILLIAM DID NEXT

In October 1937 William took over the Morning Post. He tended to exercise a light touch over his editors, unlike his brother Gomer, and respected loyalty and technical expertise.

In 1938, whilst still personally loyal to Chamberlain, he encouraged the Telegraph’s sceptical line over Munich and he urged Chamberlain to bring Churchill back into government. He was shocked by the fall of Chamberlain but by then had a close relationship with Churchill.

William wrote one book, “British Newspapers and their Controllers” (1947), “an uninspiring and unenlightening text” according to his ODNB biographer, his contribution to the debate initiated by the royal commission on the press (1947–9).[9]

He died on 15th June 1954 at the Royal South Hampshire Hospital, Southampton. His eldest son, John Seymour Berry, inherited his title and his second son, Michael Berry, became editor-in-chief and chairman of the Daily Telegraph.[10] [11] [12]