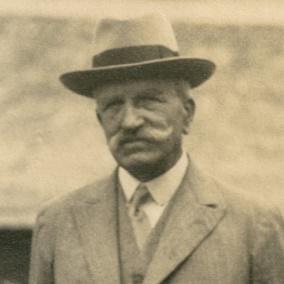 William Royse Lysaght, C.B.E., 74, (1858-1945) was a businessman, ironmaster and chairman of the family-founded Lysaght steel company for 50 years., and key player within the Rhondda business network of South Wales[1] At the time of the dinner and most likely enjoying horseracing (co-founder and part-owner of Chepstow Racecourse) and the life of retirement at his large house in Chepstow – and the owner of Chepstow Castle to boot.

Innkeeper John Fothergill was no ironmaster, in the strict sense of the word, but both his mother and father were from South Wales iron businesses, subsumed into GKN as was the business of Lysaght. So that might have been a good topic of conversation between the aesthete and the ironman. Otherwise William Royse would probably have been a good companion for all those at the table.

Probably relaxed, looking forward to an enjoyable and convivial evening amongst good company, with the opportunity to meet members of Lady Rhondda’s circle he had yet to meet.

William married Euphemia Elizabeth Stavert “Effie” Gladstone, Q2 1890, Strand, London. Effie was was born in Wrotall, Somerset, 1866, the daughter of John Eddowes Gladstone, a clerk in Holy Orders and his wife Euphemia. Effie died in Barnstaple, Devon, 1956. In 1911 they lived with their two daughters and one son at Castleford, near Chepstow.

The Lysaght steel business began with William Royse’s uncle, John Lysaght (1832-1895) of Mallow, Co. Cork. John had trained in civil engineering in Bristol and became friends with one Robert Clarke who, in 1857, inherited various business interests including one specialized in ‘zincing’ iron buckets. Clarke gave this to his friend John Lysaght as a present. The business of John Lysaght Ltd grew and eventually his son, Frederick Percy, and a nephew, Sydney Royse Lysaght, became chairman and managing director respectively. William Royse, our dinner guest, brother of Sydney, was sent by John to the Gospel Oak Company’s works at Tipton, Staffordshire, to learn the business of producing sheet iron. When John Lysaght acquired the Swan Garden ironworks at Wolverhampton in 1878 (in order provide a regular supply of puddled iron) William Royse was brought from Gospel Oak to run the plant.

In the 1880s exports, especially to Australia, drove business growth: 90% being exported, of which 70% to Australia. William Royse became responsible also for the Osier Bed ironworks (in Australia) and when it was clear that Staffordshire was doomed as a sheet-producing region, so John Lysaght, together with his nephew William Royse, planned the development of a new sheet-rolling complex by the coast at Newport, south Wales. This became the Orb works, (after the brand under which their products were sold) which William Royse took over on the death of his uncle in 1895. William Royse then was responsible for the decision to build the Normanby Park Steelworks at Scunthorpe, which was designed to supply the Orb Works with steel. Eventually they built a steel works in South Wales, which came into production in April 1921, helping to make Lysaght’s Galvanised Iron Proprietary Ltd one of the largest steel producers in Australia. Before completion of this project, the Lysaght business, John Lysaght Ltd, was sold £5 million in 1919 to H. Seymour Berry (the elder brother of Lord Camrose and Sir Gomer Berry) “their most prestigious purchase”[2] and, in 1920, amalgamated with those of Guest, Keen and Nettlefolds Ltd. (GKN) Lady Rhondda was on the board, as was Seymour Berry. Lady Rhondda resigned from the GKN Board in 1935, two years after the dinner. GKN board member Tom Callaghan was on Table 15 at the dinner.

A member of the Iron and Steel Institute since 1888, William Royse was elected to its council in 1915 and became a vice-president in 1924 and its president in 1933–5. His role as spelter adviser to the Ministry of Munitions during the First World War led to his appointment as CBE in 1918. He was also a deputy lieutenant and justice of the peace for Monmouthshire, and the county’s high sheriff in 1915.

Lord Queenborough, pictured above, was a former Conservative MP, businessman with some steel interest, fanatical anti-Bolshevist and supporter of both Franco and Hitler.[4] Lord Donegall was a journalist with a keen interest in aviation.

W.R. Lysaght was one of ten “gentry” and businessmen who owned and set up the Chepstow racecourse in 1925. One of his horses, Bessborough, won a race on the first day that Chepstow racecourse was opened. He also owned Chepstow Castle before that was transferred by the family to the Ministry of Works in the 1950’s.[5]

WHAT WILLIAM ROYSE DID NEXT

Now 75, as well as enjoying the turf, he had a particularly extensive collection of birds. We don’t know if that it was an interest of the other guests – aside from Lady Rhondda’s aunt Rose Haig-Thomas on Table A, both with their South Wales connections. They may well have known each other. The restaurateurs were probably more interested in game birds. He had another dozen years to enjoy his pastimes.

An obituary reported: “A model employer, he declared after 50 years with the firm that there had never been a strike at his works. He was wont to recall that in those days of 12-hour shifts when wages were paid once a fortnight barrels of beer were kept on tap for the men ‘in case difficulties had to be contended with.’”[6]

More recently, in 2012, the W.R. Lysaght Institute, venue built in 1928 to entertain Lysaght staff was rescued as a new venue for Newport – he would have been delighted I am sure. Indeed, a place to hold a large celebratory dinner?

Other Lysaght/Gladstone family pictures have also been shared online. 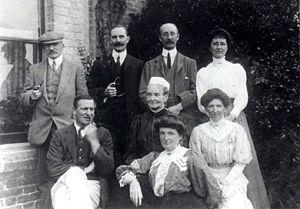