Skip to content
Ethel, Mrs H. Warner Allen, née Pemberton, 52, (1880-1974) was the wife of Herbert Warner-Allen, war journalist, oenologist and writer, and mother of George Warner-Allen artist.  Whilst we don’t not know a great deal of her life, as yet, she enjoyed the theatre and the Warner-Allens were fond of dogs, as we shall see.

We assume besides her husband Herbert and, we have suggested, alongside Marguerite Raven-Hill, the other mother on the table. She may also want to talk to Laura Wallis Mills about the recent shows.

What’s On Her Mind?

We may assume that Ethel is looking forward to a rather special evening in the company of rather special people. She may hope no-one asks after her dog.

Ethel Pemberton was born on 16th June 1880 in Coventry, to Alice Ethel Copson (1859 – 2.6.1939), born in Worcester, a daughter of a china painter, and Warwick Pemberton (1859 – 1896), variously a manufacturer, ironmonger and horse collar maker. Ethel had a brother, five years her junior, Warwick Geoffrey Travers Pemberton, a chartered accountant.

Herbert and Ethel married in Paris on 22nd September 1908, though no record shows up in any of the 20 arrondissements of Paris itself.  By 1911 her mother was living in Earl’s Court with her son.[2]  They had one son, George Woronzow Allen (born at the American Hospital , Neuilly-sur-Seine, France, 30.1.1916 – 1988), an artist of the Neo-Romantic School. [3] At the time of their son’s birth they were living on the Paris Left Bank at 21 rue Casimir Perier, 7th arrondissement, Paris, her mother at 82 rue de Grenelle, also in the 7th arrondissement. At the time of the dinner Ethel and Herbert (or simply Warner to most people – we use both according to context), and their dog Dan, lived at 8 Bloomfield Terrace, S.W.1.

We don’t have a lot of detail on the life of Ethel, but we may assume she might have enjoyed the one week “jolly” in 1929 when the United Associations of Great Britain and France met up in Cannes at Easter, a party of almost 100 taking the train, including the Lord Mayors and Mayoresses of York, Cardiff, Manchester and Norwich and the Warner Allens.[2]

Thanks to the conditioned reflexes of the dog Dan, we do have one anecdote that gives us one hint as to the life she liked to lead. A letter to The Times in September of 1932 explains:

TO THE EDITOR OF THE TIMES Sir, A tale of conditioned reflexes! Some time ago, I returned late from work, as a journalist is wont to do. My dog, a cross-bred Irish and Yorkshire terrier, otherwise a quaint mongrel, called Dan, met me on the step and went for his walk. When we came in, I carried out the traditional ritual of putting the chain on the door and expected him to carry out his part in the programme i.e., to run upstairs and curl up in his basket on the landing. To my amazement Dan lay down on guard in front of the door and would not budge. I cursed him mildly and told him to go to bed, but he just growled at me contemptuously. He was so obstinate that I left him and went upstairs. There I discovered that my wife was not in her room as I had expected. She had gone out to the theatre with friends. I came down and took the chain off the door. Instantly Dan went to bed and gave his mistress a vociferous welcome when she used her latchkey half an hour later. Yours. &c.. H. WARNER ALLEN. 8, Bloomfield Terrace, S.W.1. [4] 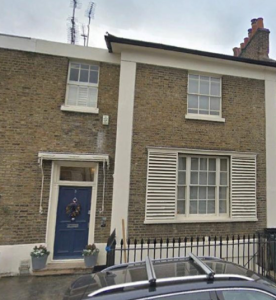 What Ethel Did Next

We may assume she accompanied Herbert to more dinners and went to more plays. She may well be, of course, the tower of strength behind Herbert as he writes and publishes.

Can anyone tell us more about Ethel Warner Allen, née Pemberton?

[1] With many thanks to Sheralyn and Jonathan for generously providing the Warner-Allen family photographs.  Reproduced with permission.