Skip to content
Alec Henry “Robin” Adair, 31, (1901-1956) was a cookery writer and both business and life partner of the restaurateur Marcel Boulestin, also on this table. They lived in England and with a house in the Landes, SW France, where he taught English to “the best people’s brats”. During the Second World War Robin was imprisoned in France and Marcel died in Paris in 1943. Robin returned to London after the war and continued writing and publishing cookery books.[2]

My favoured starting position for the table would be to seat Fothergill and Lysaght together, where there is some link between their two industrialist families, and if Fothergill’s guest were the other side of him (albeit a completely unknown quantity at this stage), to follow that with Boulestin, Emilie Peacocke and then Adair (who would then be beside Lysaght). The three restaurateurs would be seated alternately in that way and Emilie would have two restaurateurs to persuade to supply decent portions – though they ran the same restaurant of course.

Whilst expectations of a gastronomic evening might not have been high, he may well have been interested to see to what standard the hotel could cater for 130 people. In straightened economic times a little austerity might have even been in order, especially with a guest of honour whose father had been the wartime Minister for Food – though a paper written by my grandfather revealed that her mother Sybil knew even in wartime how to ensure she could have a good celebration without breaking any rules.

Alec Henry Adair was born in Malta in the fourth quarter of 1901 to Louisa Mary Knight, born 15th May 1876 in Gravesend Kent, and Joseph Adair, Sergeant Major on the Permanent Staff of the 1st Battalion, King’s Own Royal Malta Regiment of Militia. They had married in Nass, Kildare in 1896. They had four children of which two had died as of April 1911. In 1911 the family were living at the barracks in Malta. His older sister Caroline Elizabeth, later Mrs Harvey, was then 13, born in Naas, Curragh co. Kildare, on 28th October 1897.

He spent an early part of his life in Jamaica but otherwise information is scarce. At the time of the dinner he and Marcel were in full swing running their successful Covent Garden restaurant, Boulestin’s. They had started by doing private catering, their first job being to provide a dinner for Virginia Woolf and friends at her flat.[3] On 15th March 1930 he was sailing first class from Birkenhead to Marseilles, profession author, at the time resident at 34a Portsdown Road, London W9 – which is where he and Marcel were living at the time of the dinner.[4] He translated many of Boulestin’s recipe books.

WHAT ROBIN DID NEXT

In 1935 he was living at 94 Holmfield Court, Belsize Grove, Hampstead. In January 1940 he was teaching English at a school he and Boulestin had set up at La Daoune, Hossegor, Landes, near their home, to which “all the best people are sending their brats” according to Tatler columnist “Priscilla of Paris”. They misread the seriousness of the war situation and Robin was interned in France during the war but he eventually returned, alone, Boulestin having died in Paris in 1943.

In April 1945 Robin was writing again, and here in Britannia and Eve, he presents recipes he had learned to cook when was in the Red Cross wartime camp.

I Learned A Lot When I Only Had Little

Our Pre-war Cookery Expert, who returns to these pages after Four Years in a German Internment Camp in France

“Four years of captivity in a German internment camp in France have taught me much. The British Red Cross organization saved us and with their wonderful parcels we could live reasonably well. All the recipes which follow are of dishes made from ingredients contained in our parcels and therefore similar to the supplies available in the English shops. The recipes are naturally all of a makeshift kind, for we had no weights and measures. Our utensils, often home made, were primitive. For fuel anything and everything was utilized. Stoves burning balls of paper, cardboard and scrounged wood smuggled spirit lamps, camp fires, tins containing ration grease with an improvised wick. After we had become somewhat organized, herbs, salads, tomatoes, radishes were available, for some enterprising people started little gardens dug out of the barrack yard, and later a few more ambitious vegetables were grown.[7] 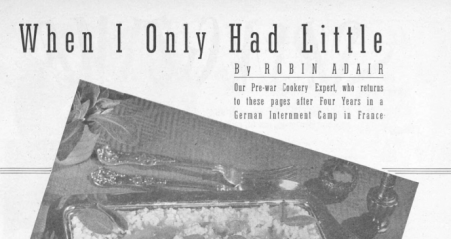 He continued writing and publishing on cookery in the UK.

In 1955 he was living at 25 Half Moon Street, W1. He died on 11th October 1956 after jumping into the Thames at the Victoria Embankment, Westminster: in financial difficulties and suffering depression, the verdict was that he took his own life.[8] [9] As Robin Alec Henry Adair he was then resident at 13 Clarges Street, probate of his estate of £104 to Thomas Roche, waiter. A sad end to an eventful life.

Both his parents and his sister survived him. His mother died in mid 1949 in Chichester (living there at 136 Bognor Road in 1939) and his father died in a Chichester nursing home on 1st February 1951. His sister Caroline Elizabeth Harvey died forty years later, aged 93, at the Old Vicarage, Wallingford, Oxon on 1st July 1991.