It hardly matters on a table of four: I would have paired them by age group: Misses Campbell and Solomon, in their mid 50s, Misses Blunt and Gross in their 30s. And if Dorothea was beside Dame Janet Campbell they could have shared views on their alma maters the London School of Medicine for Women and the Royal Free Hospital.  But of course our first contender Janet Campbell might have o give way to Dr. Helen Campbell, as we have a good choice.

We don’t have much to go on, but we can imagine that those who knew each other, catching up on the latest news, and for those who were not yet acquainted, a chance to meet another woman pioneering in the medical world of the 1930s. Being based on the South Coast it is highly likely that she knew Dr Louisa Martindale.

Dorothea was born in Oxford on 14th October 1901, the eldest daughter of Kent farmer’s daughter Jane Weston and Christ Church, Oxford Tutor and Librarian Herbert William Blunt, (29.1.1864 – 26.5.1940). At the time of the census on 2nd April 1911 we find the family a little scattered: father in Ely (the place of his birth), Dorothea, with her mother and younger sister Phyllis Mary, boarding with a family in Benenden (the place of her mother’s birth) and brother Henry Pyot boarding with his unmarried farmer uncle and two unmarried aunts, also in Benenden. Their father still listed Woodstock Road as his address so perhaps this was a temporary family distribution.

Dorothea attended Oxford High and the London School of Medicine for Women. She served as a Temporary Assistant Medical Officer, Maternity and Child Welfare Office in Birmingham, as Obstetrician and Gynaecologist House Surgeon at the Royal Free Hospital, London, House Surgeon, Louth London Hospital, and Case Officer and House Surgeon at the Ear Nose and Throat Dept., of the King Edward VII Hospital, Windsor. In 1924 and 1925 she was living at 15/16 Brunswick Square, Bloomsbury, most likely one of the ladies hostels on the square – Dorothea’s 14 other co-residents were all unmarried women except for Mr and Mrs Fred Brooker, probably the caretakers/wardens (the area is now the modernist residential, shopping and cinema development Brunswick alongside Coram’s Fields). At No. 20. the residential Minerva Club, a club, was established by Dr Elizabeth Knight and the Women’s Freedom League in 1920.[2]

Dorothea was a member of the BMA and the Medical Women’s Federation and lived at Oxford (1930, 247 Woodstock Road) and at 12 White Rock, Hastings.[4]

The year before the dinner we know that she travelled to Tangier, with her sister Phyllis, who was a secretary. Their older brother, Henry Pyot Blunt, who became a reservist in August 1918, had married in 1928 (when “a gentleman” at a private boys school, Upper Canada College, Ontario) and died in 1955 when living in Enfield, North London.

WHAT DOROTHEA DID NEXT

At the time of the dinner both her parents were alive but her mother died on 11th February 1935 and in 1939 Dorothea was living (for the census at least) with her widowed father at White Rock, Hastings. In the same year she again travelled to North Africa, to Casablanca. Her sister had married in 1934.

In 1937 Dorothea became a member of the Royal College of Obstetricians and Gynaecologists – on whose Council Dr Louisa Martindale, Table 10, was elected, only the second woman, in 1934. In 1938 Dorothea contributed a “Clinical memorandum” on “an unusual case of hydramnios”- that’s excess amniotic fluid during pregnancy – to the British Medical Journal.

In 1941 she moved from the South Coast to Birmingham, as this rare photograph witnesses.

“AT a meeting of the personnel of the Carlisle-parade First Aid Post on Monday warm tribute was paid by Dr. G.R. Bruce (Borough Medical Officer Health) to Dr. Dorothea Blunt for her untiring work at the Post.  Dr. Bruce was supported by Miss Walton and the Rev. A.B. Duncalfe who said that Dr. Blunt was leaving many things behind as gifts to the Post, which she would be remembered, particularly the valuable knowledge which she had skilfully and successfully imparted.  A presentation was made by Miss D. Dixon, on behalf of the personnel of the Post, expressing their best wishes for the future success of Dr. Blunt at her new post in Birmingham.”

She was a Divisional Surgeon of the St John’s Ambulance Brigade from at least 1942 and was appointed as a serving sister of the Hospital of St John and Jerusalem in June 1949.[5] [6] 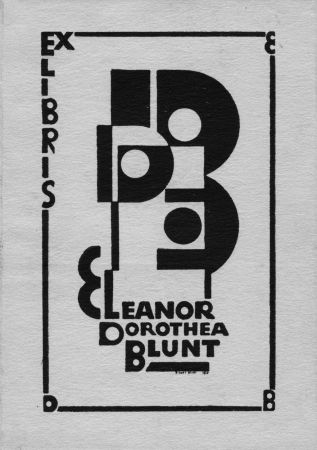 While we don’t have a photograph as yet her monogram art deco bookplate, now held in the Los Angeles Public Library collection, is rather attractive though there could be another person of the same name.

Dorothea’s father died on 26th May 1940 leaving probate to her. She herself died at the age of 48 on 1st November 1950, then living at Black Mill, 107 Middle Road, Ore, Hastings, her probate assigned to her married sister’s solicitor.[7]