Mabel Dorothy Auld, 43, (1889-1965) suffrage organiser and speaker, was the London Organiser for branches of The Women’s Freedom League and for the National Union of Societies for Equal Citizenship (NUSEC). At the time of the dinner she was living at 51a St. Mary’s Road, Ealing.

Who might her guest, or the sixth table member, have been? Another suffragist or suffragette? Or a Time and Tide member?

Miss Auld is not an unusual name and we have neither christian name nor initials. But Dorothy looks a very likely candidate and would be well qualified as the convenor of this table (given the final guest is in her name). Do you have other candidates? Or can you make the case for Dorothy even more convincing?

Probably with Arthur and Kitty Marshall sharing war stories of the suffrage campaigns and ongoing efforts.

Catching up on the suffrage campaigns and more networking?

Mabel Dorothy Auld (she used Dorothy as her given name) was born in Blackheath on 23rd May 1889 (I suspect the 23rd May 1896 date in the 1939 census is incorrect, being 11 in 1901) to Harriet Emily Prior, daughter of merchant Samuel Turner Prior, and William Auld, Bank of England official and son of schoolmaster John Auld.[1] 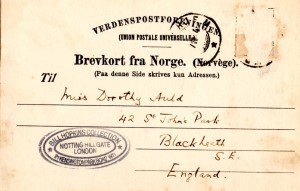 As we lack extensive information about Dorothy, we can illustrate her story with one totally unrelated anecdote. When living in Blackheath, she received a postcard from a James Collin Frances Morson, a schoolmaster (1872-1942) sent from Norway on 6th August 1904 where he was holidaying. He was teaching in nearby Greenwich in 1901 – a tutor of Dorothy’s perhaps? 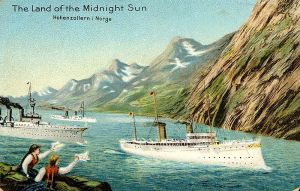 He remarks that ” ‘The “Mailed Fist’ with 10 Torpedo Boats, a cruiser & Hohenzollern was making a splash at Bergen”.  The Hohenzollern was the German Emperor’s yacht – and sailing in Norway was one of his favourite locations.[2]

Dorothy worked hard all over the country for the National Union of Societies for Equal Citizenship (NUSEC), 15 Dean’s Yard, SW1, as reported in the organ of the NUSEC, the Vote in 1926,[3] as well as organising the Highbury Corner meeting in 1927.[4]

A 1993 thesis reported that “in July 1925 the National Executive Committee (NEC) of the Women’s Freedom League (WFL) received a letter from a member Mrs Juson Kerr, stating she had been unable to secure a speaker for a meeting in Deal as the planned speaker had been informed by a member of NUSEC that the WFL was a “bolshevik” organisation.’ Following an urgent request for clarification the NUSEC member, Miss Auld replied that she had simply said that the League had ‘bolshy ideas’ ”[5]

In 1929 she resigned from the National Union of Societies for Equal Citizenship (NUSEC), and was appointed London Organiser for branches of The Women’s Freedom League,[6] a role which clearly was needed: “Whereas once a multitude of branches had thrived in the active environment of London, in the years after 1918 the close proximity of many served to leave them bereft of members and searching for new angles to their work. The ebb and flow of short-lived branches only stabilised with the appointment of a permanent London organiser in 1929.”[7] For 8th March 1928 she was organising a NUSEC meeting at the Queen’s Hall and Mortimer Hall, with a little advice from Eleanor Rathbone to ensure Labour MPs came – both Lady Astor and Baldwin spoke.[8]

A speaker as well as an organiser from 1932 (at least), Dorothy was living at 51a St. Mary’s Road, Ealing. She frequently appears in the suffrage press as the organiser of events.

WHAT DOROTHY DID NEXT

At the time of the 1939 census at 51a St. Mary’s Road, Ealing, Dorothy lists herself as an “organising secretary” with widow Mary Paine, born 21st June 1869. Mary was the mother of Gwendolyn Ada Paine listed with Dorothy and Mary in the Electoral rolls. Gwendolen, born 1902, was born in Canonbury, Islington and lived at 57 Ferntower Road, Highbury in 1911.

[2] Postcard from Morson from my personal collection. Postcard of the Hohenzollern from Wikipedia