Skip to content
The best candidate we have at the moment is Thomas Cole, 63, (1869-1941) J.P., the Managing Director of Thomas Cole and Son, builders, Neath, since 1915 Hon. Treasurer of the Neath Conservative Club, on the Borough Council from 1922 and in 1934-35 Mayor of Neath and in 1936 elected President of the South Wales Federation of Building Trades Employers. His company built many of Neath’s most notable buildings.

A bit of a puzzle. He is a very credible candidate but some  confirming evidence would be good.

He would have been a good dinner companion to Josephine Collier given her early background in researching the working conditions for women, and also for Mrs Ewart, running her own drapery business in London.

Most likely the state of the economy and how you create jobs in South Wales.

Thomas Cole was born in Briton Ferry, Glam. on 24th October 1869, the son of the German born Louisa Warneike and the Begelly, Pembs. born Benjamin Cole, building contractor. Thomas had five siblings and a half brother and half sister – after his mother had died in 1879 his father married Louisa’s (widowed?) sister-in-law, Charlotte née Warneke, and they had a son Herman and a daughter Minna. Thomas married Mary Jane Davies in 1891 and they had  two sons, and a daughter Irene.

Thomas built up a substantial building business, Thomas Cole and Sons, previously Cole, Waring & Cole, employing his two sons Albert and Thomas Cecil. In February 1933 the younger son Cecil became Vice President of the Neath and District Master Builders’ Association, at a meeting which called on all house and property owners to have all repairs or new work carried out immediately through members of the association in order to create work for the unemployed.[2] A measure perhaps of the size of his business and perhaps a degree of contentment amongst his workers (he does seem to be on a table where the world of work is relevant) came in 1931 when his employees planned to start a cricket team.[3]

WHAT THOMAS DID NEXT

Thomas was about to become Mayor of Neath, in 1934, which brought him more into the public eye. For example, as Mayor, in 1935 he attended a meeting with prominent Welsh businessmen to meet a trade delegation from Canada[4] and he was notable enough for the Western Mail of 24th October 1939 to choose him as the birthday of the day.[5] In February 1938 he stirred things up at a meeting of the Conservative Club by proposing a motion of confidence in the Prime Minister, which after much debate was ruled out of order. The newspaper itself that day was full of the clashes and votes of confidence between Chamberlain and others in the House of Commons over Italy and Mussolini.

Reasons why he should be at a dinner on honour of Lady Rhondda (the former Lady Mackworth) at the Rembrandt Hotel in London, are tenuous, but we have a few straws to clutch. In 1937 his company was granted a lease by the Trustees of the will of Henry Nathaniel Miers, a family connected with the Mackworth family though Molly Anne Miers, wife of Robert Mackworth, to build six houses. In October 1935 Thomas was presented with a silver casket by his fellow directors of the Bristol and West of England Collecting Society, in celebration of being the Mayor of Neath, the ceremony taking place at the Mackworth Hotel (no longer Mackworth owned but owned by R.E. Jones Ltd, owners of the Rembrandt).  Thomas was spotted at the Strand Place Hotel in London in the same month – we know not the reasons for his visit but it made the papers because he bumped into a fellow citizen who was in town meeting a doctor, and Thomas was relating back home that the prognostication was hopeful…… So Thomas perhaps was wont to visit the capital, though he may have been there in the course of his Mayoral duties.[6]

All in all, Thomas Cole was an upright citizen of Neath, well connected and in the words of the Port Talbot Guardian, “The story of Councillor Cole’s life tells the romantic rise of a boy of humble parents to the head of an important business concern and a prominent position in the town’s public life.” [7]

He left his mark on his home town, as the Port Talbot Guardian noted: “Under his management the firm has erected many important public buildings in the town in post-war years, including a number of banks of facing the G.W.R. Station approach.”[8]  Today if you exist the station you might remember the words carved into St. Pauls’ Cathedral “if you seek his memorial look around you” – as at least three of his banks are still there. 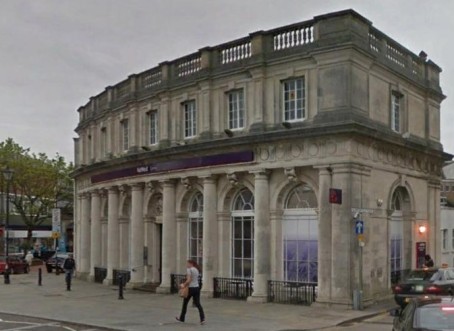 But you can’t please everyone, and when the lifelong Conservative stood as an independent candidate for the South Ward in December 1935, at the end of his Mayoralty, he was very surprisingly trounced by the socialist candidate. [9] He probably didn’t have many fans on the left, noting that in January 1933 he had voted against the proposal from the ILP that the book Marxian Economic Thought and ‘The Town Labourer’ should be included in the school syllabus.[10]

Thomas died on 27th April 1941, leaving his widow and three grown up children.[11]  On the north wall of north aisle of the Church of St David, Neath, Neath Port Talbot there is a memorial to Thomas Cole and to his grandson, Albert Thomas Edward Cole, the eldest son of his son Albert, who was killed in Burma in 1945. The stained glass window, designed by F.M. Baker and created by G. Maile & Son. The faculty for the window is dated 1946, and the cost of the window was £145.

The inscription reads: Given in memory of Thomas Cole, a sidesman of the church and Mayor of Neath in 1935, and of his grandson, Captain A.T.E. Cole (South Wales Borderers), who was killed in Burma in February 1945. The Insignia of the South Wales Borderers is above the Good Shepherd, and a badge of Neath above the left-hand light.  Captain Cole is buried in the Taukkyan Cemetery in Rangoon.

More ideas please! Does he have a particular link to Lady Rhondda? Are there other Thomas Cole candidates?