Skip to content
Miss Minnie Emily Moore, F.S.S.A., 61, (1871-1961) may well have been the first woman to be accepted into the male dominated accounting profession and she served as the auditor for the Six Point Group. Despite having to look after her siblings from the age of 15, her mother having died and her father, a clergyman, having moved away from home, she got herself to Cambridge, and ran her own accountancy practice in London. A self-made woman in a man’s world.

My suggested plan for the table: of Abbott, Slimon, McFarlane, Helen Archdale, Mayo, Marsh, Betty Archdale and Moore – would allow Minnie to spend time with the up-and-coming barrister-in-training Betty Archdale, very much the next generation of this table breaking into hallowed male preserves, while perhaps plotting the next moves of the Six Point Group with Elizabeth Abbott.

This was a difficult business world, the early ’30s, and she might have been quite sought after by others in the room: and perhaps a good network for her own business.

Minnie Emily Moore was born on 1st June 1871, baptised 9th July 1871, in Pitchcombe, Gloucs, the eldest of eight children born to Emma Cole (1843 – 1887) and Philip Hughes Moore, (1839 – 1914) an Isle of Man-born clergyman (Established Church).  He left the IoM to go to Cambridge and never returned to live there.  His wife and two small daughters died within a fairly short time period.  The eldest son, named after his father, went to the US to seek his fortune, but simply disappeared.  The family story is that they believe he may have been assaulted/robbed and thrown into Boston Harbour.  Thus not long before her sixteenth birthday Minnie had to take over the running of the family and the care of her siblings.  Her brother George Augustus (in the photograph) moved to South Africa.  He died at 44 in 1924, leaving two young sons: Minnie kept up a correspondence with his family there.[1] 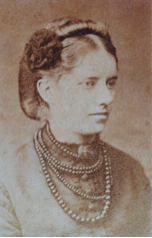 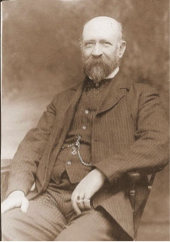 Despite that challenging start in life, Minnie made her way to Girton College, Cambridge. 1892-1895 (Mathematics Tripos) and Minnie may have been the first woman graduate to enter the accounting profession. In 1911, at the age of 39 – of no profession – she was living with her father in North Shields, Northumberland.

In 1919 she was established in London, and advertising her services thus:

The profession of chartered accountant is one of the newest to be opened to women.  Miss M. E. Moore deserves many congratulations for being the only woman to pass the final examination of the Society of Incorporated Accountants and Auditors in London this year.  The society has always been of an extremely conservative disposition, and it is only since the war that it considered the possibility of admitting women at all.  Miss Harris Smith was the first to pass the examinations, and another successful candidate was Mrs. Ayro Purdie, but the total number of women accountants is still small.

Miss M. E. Moore is associated with a firm in the City, but works entirely on her own.  She co-operates in the firm’s business while keeping her private practice independent.  Many of the women’s societies are on her books, as well as a leading woman’s paper, an eminent lady doctor, and other less notable names. The apprenticeship and training for such a career is a long one, five years.  The usual mathematical degrees are necessary. [6]

What was the “leading women’s paper” amongst her clients?  In 1925, in an article “Progress of Women in Business and Commerce in 1925” written for The Woman’s leader and Common Cause, by Viscountess Rhondda J.P., no less, Minnie is one of just three mentioned by name:

Another pioneer is Miss M. E. Moore, a chartered accountant with a wide range of business; here again is a woman who, unaided, has reached a good position in a new walk of life. [7]

The “here again” phrase is due to a reference just before by Lady Rhondda to advertising pioneer Miss Jean Lyon, on Table 5, who a year later joined the Board of Time and Tide.  However The Woman’s Leader had to correct their illustrious contributor a month later:

Her presence at the dinner will have been undoubtedly linked to the fact that she was the Hon. Auditor of the Six Point Group. Her business address at this time was M.E.Moore & Co., 46 Datchet House, Augustus Street, NW1, and also her electoral roll address in 1934. In 1932 her electoral roll address was 83 Walterton Road, Paddington with a family of four named Headland.

WHAT MINNIE DID NEXT

Minnie died in her 90th year on 8th January 1961 in Mannin Infirmary, Braddan, IoM, when resident at 35 Arbory Street, Castleton, Isle of Man, probate granted to John Frank Renwick, solicitor attorney of Ramsey Bignall Moore, a second cousin who became the Attorney General of the Isle of Man. She remembered her family members in South Africa in her will.

[1] ©The Mistress and Fellows, Girton College, Cambridge. Not for reproduction without permission. With many thanks to the college archivist, Ms.Hannah Westall.

[2] Many thanks to the Moore Family for contacting us and providing further family history: and giving permission to publish the three photographs.