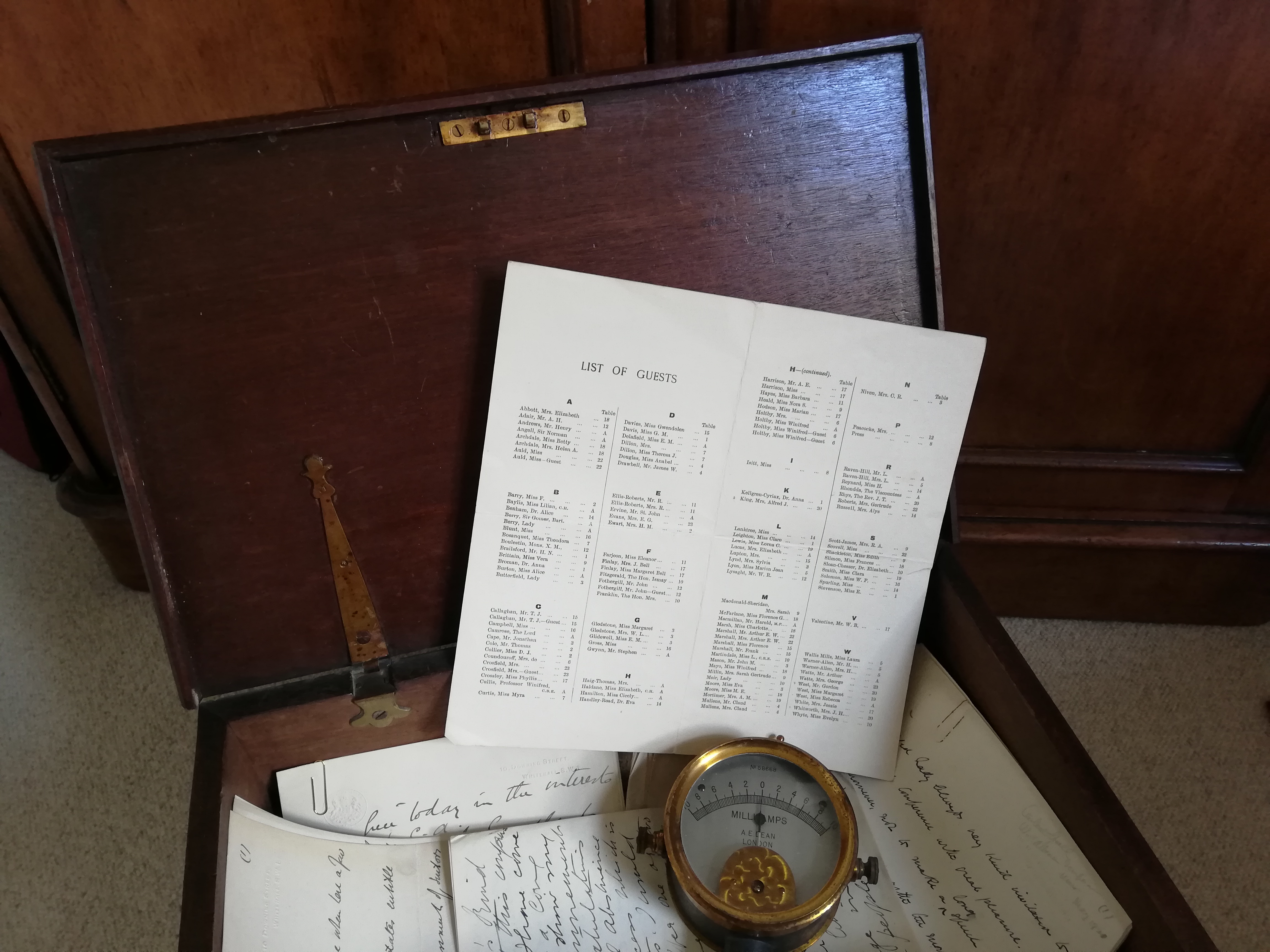 Can you help me find the missing pieces?

My puzzling all began with finding a two page Guest List for a dinner held on 23rd March 1933 at which friends and colleagues assembled to present a portrait by artist Alice Mary Burton to Lady Rhondda – suffragette, businesswoman and publisher. The Guest List was buried amongst the box of papers which has come down to me from my grandfather, the Rev. J.T. Rhys, onetime  Private Secretary to Mrs Lloyd George at No. 10. Downing Street. The papers had been largely untouched in a box for eighty years. He was one of the 28 gentlemen at the dinner, alongside almost 100 women, amongst them many of the pioneering women of the early 20th century. As one of the Press attending commented “I found it difficult to make a mental note of who was not there”. A handful were familiar names to me, such as Vera Brittain, Harold Macmillan, Eleanor Farjeon, Rebecca West, Winifred Holtby, and Jonathan Cape, and soon I was able to work out the identity of all but a handful. On this website you will find pen portraits of the attendees – where I have also tried to imagine the topics of conversation around the tables – and a number of puzzles, including:

When we first published The Dinner Puzzle we had five Mystery Guests.  We are now virtually down to just one, Mr Frank Marshall. on Table 15. He is proving to be hard to identify, though we have some tentative ideas.  Can you help?

Of the others who made up the five original Mystery Guests, they still await that clinching evidence that make them certain, and are listed below in that next category.

And there are a further six people listed simply as being a Guest of a named person (that person we think the convenor/host of the table and simply having one place unfilled place to make up the even numbers). It is possible the seat was left unfilled. It will probably require a diary to emerge where someone mentions the dinner and specific people.  But we can still wonder who were the two Guests of Miss Winifred Holtby on Table 6, where her mother Mrs Holtby was seated with Edith de Coundouroff, and who was the Guest of innkeeper John Fothergill on Table 12, the Guest of Welsh industrialist Tom Callaghan on Table 15,  the Guest of Miss Auld on Table 22, and the Guest of Mrs Crosfield on Table 23.

Finally there was a table for the Press, Table 8, but only Kate Isitt of The Manchester Guardian is named.  Who might have joined her?

There are 15 guests who have been identified with varying degrees of uncertainty/certainty but where clinching evidence is needed to remove all doubt.

First, we now have an intriguing candidate for Mr W.B. Valentine, (once one of our five mystery guests), though there is still an element of mystery about him. He holds the seat in part because there is no obvious competition and we lack any strong link to Lady Rhondda and her network. Can you help?

There are seven candidates who have always had an element of doubt about them: Is Thomas Cole the Conservative Neath building contractor, soon to become Mayor? Is Mrs E.G. Evans the widow of the well-known Welsh musician Harry Evans? Is Mrs H.M. Ewart the single mother running the family drapery in South London? Is Miss Lanktree the daughter of an Irish policemen? Is Miss Florence Marshall the future head of a London girls’ school – and this is one of the more speculative of these names. Is Mrs George Watts Mary Seton Watts, the widow of the Victorian painter George Frederic Watts? Which Mrs Crosfield of the famous Quaker family was in attendance (I have three candidates) if indeed she was from that family at all?

There is also uncertainty as to the identity of Miss Campbell on Table 16, seated with three other medics. I have recently changed the candidate, now preferring the Dr. Helen Young Campbell, pioneering children’s medical officer to our earlier candidate, the distinguished medical officer Dame Janet Campbell?  Can you help us?  Both of their biographies remain on the site, on the same page. Both are great pioneers and worth getting to know.

Until now, the identity of Mrs Gertrude Roberts, (again one of our original five mystery guests) has been unknown, but we now have a good candidate but without clinching evidence, and she holds her seat on Table 22 in part due to the lack of competition.

Finally there are five which I am almost certain I have the right person, but don’t have that clinching evidence. Inspector of Schools Elizabeth Stevenson seems to tick all the right boxes for the seat occupied by Miss E. Stevenson, on Table 1. Is Mrs Elizabeth Lucas on Table A the writer, who ran an orphanage in France during WW1 and wife of Edward Verrall Lucas? Or was she Elizabeth Lucas the cookery writer? Or are they one and the same person? Or even another Mrs Elizabeth Lucas? Is Miss Auld on Table 22 the suffrage organiser and speaker, Mabel Dorothy Auld? And finally I am now very pretty confident that Table 17’s two former mystery guests, Miss Marian Hodson and Miss Phyllis Crossley are both King’s College, London, students, but I would still like to know more about them. Again, more ideas welcome!

Since we went online a year ago we have found two thirds of the (then 46) missing photographs of the guests, with the help of the contributions of readers and archivists. We have a full house for Table A, and for Tables 4, 6, 8, 11, 12, 15, 18, and 20 (my grandfather’s table). Still missing are pictures of Dr Anna Broman (Table 1),  Mrs H.M Ewart (T2), of two of the Gledstone/Mason family (T3), of actress Laura Wallis Mills (T5), of Mrs Dillon (T7), of Nora Heald, (T9 – though we have a great drawing), of Miss Evelyn Whyte (T10), of Dr. Helen Campbell and of Miss Gross (T16), of Gwen Harrison, (T17), of three from Table 19 (Mrs Mortimer, Clara Smith and Margaret West), of Miss Auld (T22), and of Mrs Crosfield on Table 23. And of course I will be on the hunt for photos of the mystery guests should they ever be identified.

What other interesting relationships lie hidden in this remarkable network of remarkable people?  Each table seems to have its main host/organiser, with the guests often having a common interest.  In the tags we have noted those who were, for example, well-connected with Winifred Holtby. There are undoubtedly other such networks – education, work, personal relationships, causes they espoused.  We’d love to know more of how all these people fit together to help enrich the puzzle. There are for example at least eleven guests who were at some point members of PEN, the writers’ association (which indeed hosted events at The Rembrandt during WW2). And do suggest additional tags which might apply to people: I have been careful, for example, not to overuse the tag feminist, and to use with care the tags suffragist and suffragette.  All advice welcome.

And Where Is the Portrait Now?

And almost finally: do you know where the portrait is? A photograph survives with Lady Rhondda standing beside it at the dinner, but unlike the almost identical copy, now hanging in St Fagans National Museum of History at Cardiff, part of the National Museum Wales, the portrait seems to have vanished. Artist Alice Burton was known to have made more than one version of some of her works. It would be wonderful to rediscover it!

And Are You a Relation Too?

And finally, perhaps like me you are related to someone who was at the dinner, or know someone who was. I am now in touch with more than relatives of more than 20 guests, who have contributed their personal recollections, pictures and corrections. Thank you everyone and we look forward to hearing from others. There are response boxes at the end of all the bios, or write your ideas in the box below. Your name and contact details will not be shared without your specific permission. I would be very happy to give full credit for information that helps fill in the Dinner Puzzle!  And what table would you have liked to have joined on 23rd March 1933?

And finally, finally, if you can do support the monumentalwelshwomen project which is aiming to erect, over the next five years, five statues to five Welsh women who have made a great contribution, including Lady Rhondda.  See Angela V. John’s essay for more information.

Do read the great talks and debate now available online from the Nottingham Trent T&T Centenary Project – a Festival of Women Writers and Journalists.  Angela V. John gives her perspectives of Lady Rhondda, the publisher/founder/editor of Time & Tide, and listen to talks on the work of Dinner Puzzle guests E.M. Delafield and Cicely Hamilton and other debates.

14th May was the centenary of the founding of Lady Rhondda’s Time and Tide. In addition to the above  Angela V. John has written a new piece on this great anniversary on page 94 of the journal  The Welsh Agenda.… enjoy!

And now Dr Eleanor Reed has written a new piece for us of the Centenary-celebrating project at Nottingham Trent University Time and Tide: Connections and Legacies, a project which will be ongoing over the next couple of years with in depth pieces on Time and Tide, and on many of the Dinner Puzzle diners.

9 thoughts on “Welcome to The Dinner Puzzle!”

© Richard Rhys O’Brien 2019 Copyrights for other material are also indicated on this site, in particular for visual images.